The annual awards for live entertainment 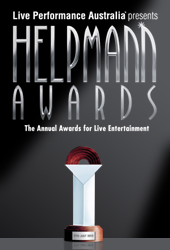 The Helpmann Awards recognise distinguished artistic achievement and excellence across the major disciplines of Australia's live performance industry. In total 43 awards were presented this evening by some of Australia’s most celebrated talent. A full listing can be found here.

Congradulations to the plays and playwrights nominated in this year's suite of awards, in particular to Andrew Bovell whose adaptation of Kate Grenville's The Secret River was named Best New Australian Work. The Sydney Theatre Company (and it's co-presenters) also received a nod for its production of The Secret River, which was awared Best Play. Making it a clean sweep, Neil Armfield was acknowledged for his work on this production, receiving the award for Best Direction of a Play.

For more information on the Helpmann Awards, visit helpmannawards.com.au and you can find a listing of previous award winners and nominees available on AustrlaianPlays.org in our Awards listings.