Back to Back Theatre - Bruce Gladwin in collaboration with Simon Laherty,
Sarah Mainwaring, Scott Price, Sonia Teuben and Brian Tilley

TThis essay is divided in two parts. The first is a personal reflection on my own theatre practice and a current struggle for meaning. The second, a search for answers, in the form of a transcript, is a discussion between Back to Back Theatre actors Scott Price, Sarah Mainwaring, Brian Tilley, Simon Laherty and Sonia Teuben, prompted by questions from me.

I’ve been struggling with the thought of ‘why bother’ for a few months now. You know, what’s the point of trying to make great theatre?

Probably since my mother passed away late last year, these questions and others to do with temporality, artistic legacy and life’s purpose have played on my mind.

I’ve appreciated the space I’ve been given to mourn, but as with Hamlet, it doesn’t feel quite enough.

Sadness becomes blunted among ordinary things like eating toast and feeling ambivalent. Tonight I’ve been making salami with my in-laws. It involves mixing 60kg of pig flesh with salt, chili, capsicum paste and cracked pepper. As I’m squelching the meat between my hands, in the cold, in the garage, in Reservoir, I think what a lovely warm family event this is. I begin to remember my mother and again, I start to mourn, not my mother, but my childhood. The leading witness to my childhood is gone and I’m suddenly aware there is no one left to verify that I was once a child.

In my melancholia it’s been difficult to think and make theatre, when theatre – something that has given my life great meaning – feels meaningless. People who work in the theatre sometimes admit to me they don’t even like theatre. I’m not like that. I love it. But lately, I’ve been adrift and not very good at admitting it.

I like the idea of being invisible. Writing director’s notes and explaining how work was made at post-show question and answer sessions does not come easily to me. As a director, I want to feel more than invisible: my ideal is for the audience to be oblivious of the director, to believe that the performance came into being via birth or hatching. No mark or thumb print, no lines of construction.

It’s easier to be imperceptible when you collaborate with the Back to Back Theatre ensemble.

When I first saw the ensemble's work in Geelong in 1989, I experienced something I'd never seen before – intelligent, intuitive, tense, raw, heartfelt, direct, honest, fragile, liminal, theatre like chaos on the edge of control. I spent most of the performance feverishly monitoring my own reaction to what was on stage. What I found was guilt in being invited to look, indeed to stare at people I’d always been told not to look at. It was terrifying.

This was theatre that excited me. It illuminated the strangeness of my own thoughts. It scared me. To translate this from the personal to an audience would be to ask the public to have an aversion. In the world of marketing and audience development, it would be to teach the audience to be comfortable with being uncomfortable.

It’s not easy to achieve.

Over time I came to know the company. The actors dominated; they were theatre makers. Some devised through improvisation while others spent weeks at their desk churning out reams of writing and drawings. The writing process was respectful of the creator’s disposition. The development of a new work was a hothouse of workshop practice. What would otherwise have been perceived as limitation was a spark of artistic liberation. Even watching from the sidelines felt like riding on the wave of a new movement in art.

Perhaps it was the premise of the company’s engagement with artists with intellectual disabilities, a hangover from the heady days of the 80’s theatre collective or maybe it came from inspired governance and artistic leadership of the company at the time, but the excitement it generated made me wonder why more theatre companies didn't make work in this manner, that is, to engage with the full creative potential of each individual.

What seems evident to me now in retrospect, as someone who has come to know the company well, over most but not all of its history, is the fertile and extraordinary room that has been afforded to Back to Back Theatre by the Australian cultural community and various agencies. Through the social and cultural policies of the 1980’s and 1990’s, a space has been made to allow the company to sit alongside the established and orthodox with no expectation to fall into line with convention. What is unique has been championed. The conversation is open, the company taken seriously, artistically, and in return has had the opportunity to deliver its full creative potential.

That hasn’t happened anywhere else in the world.

It’s a bold statement but I would contend Back to Back’s operation as a theatre company is beyond any expectation of possibility. The company’s record of achievement or even existence could not have been dreamt of in the recent past. In its emerging actuality, Back to Back has ridden a wave of social reformation for people with intellectual disabilities, placing Australian theatre at the forefront of artistic expression as a driver of dynamic political change.

I’m more interested in funding arts companies that cater to the great audiences that want to see quality drama, or music or dance, than I am in subsidizing individual artists responsible to themselves.

The implication here is that independent artists as well as small arts companies are less productive and in return offer less value. It taints these artists as inferior and different. In being different, these ‘deviant’ artists are guilty of somehow trying to command control. The Senator’s statement offers both a cultural plan and a slap on the wrist for those deemed to be artistically abnormal or somehow selfish.

I’m not sure if Back to Back Theatre falls into Senator Brandis’s categorisation of those companies catering to great audiences. We definitely play to large houses and we play a lot of shows. My concern with the Senator’s worldview is whether a company like Back to Back Theatre, if emerging now, would have the opportunity to grow in a future environment where only the ballet, the opera, the state theatre companies and orchestras are funded? Or to pose this question in a more open way: how are we, in this generation, going to accept and nurture the small, the fragile and the different when it unexpectedly arrives? What policy and what reinforcement will be in place to verify and champion the voices and stories we are yet to witness? 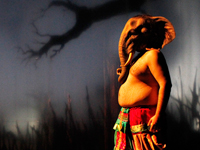 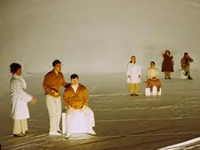 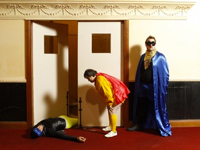 Back to Back Theatre productions 'Ganesh Versus the Third Reich', 'Soft' and 'Super Discount'. Photography: Jeff Busby

Showreel: Back to Back Theatre

Bruce Gladwin and Back to Back Theatre

Back to Back Theatre was founded in 1987 in Geelong, Victoria, its mission being to create theatre with people who are identified as having an intellectual disability. Using their unique position as outsiders to cast a discordant gaze at sociaty, the members of Back to Back Theatre explore the points of friction between economic exploitation and humanism, between the social and the artistic, between the legitimate needs of individuals and the tyranny of normality. Consisting of five full-time actors, the company has been headed since 1999 by director Bruce Gladwin. Favouring a long-term creative process based on improvisations with the actors, Bruce and his company have more recently developed radical theatricality by focusing on the real issues underpinning the performances, adopting an aesthetic of visual poetry and a continuous seesaw between what is performed and what is represented.

For recent major works by Back to Back Theatre - Soft (2002), Small Metal Objects (2005), Food Court (2008) and Ganesh Versus the Third Reich (2011) - have made the company internationally renowed and, over the past decade, the troup has performed in more than 50 cities and in major festivals around the world.

We encourage you to comment on this post. All viewpoints are welcome, but please be constructive. We reserve the right to make editorial decisions regarding submitted comments, including but not limited to removal of comments.