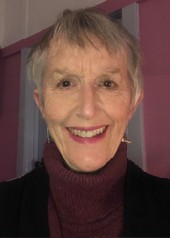 Margaret Davis began her career in theatre as a performer and has been a theatre director since 1980 and a playwright since 1990. Her produced works include: Wolf Moon, Isis Dreaming, Mad Before Midday and The Woman on the Twenty Dollar Note which was nominated for an AWGIE award for best new play for young audiences. Margaret founded her own company, Two Planks and a Passion, in the mid 90s and produced ground-breaking works which explored the boundaries between text-based and physical theatre. Among their productions were Margaret’s adaptation of the gothic horror novel, The Monk, and an original work, Spilling Bodies, which received Australia Council funding and several more productions. Margaret has completed two commissioned works: Women Through the Windows (for Hyde Park Barracks) and Forging Ahead, a large cast work about convicts, forgery, asylum seekers, national identity and identity theft.
In May 2017 Margaret created and directed a production of a new work about food and memory, Breaking Bread, with a team of writers and actors from the Blue Mountains and followed this with Eating Pomegranates in March 2019. The work, which celebrates bodies through all stages of life and death, was developed through a QLab residency at the Joan Sutherland Performing Arts Centre and the support of the Blue Mountains Cultural Trust. In 2019 she created Push Me Away Pull Me Closer as an Originate young artists' project at Q Theatre. During the Covid 19 crisis Margaret has written The Angel Code as part of Q Theatre’s Short Message Service and an autobiographical piece for Come to Where I Am – Australia for Critical Stages and Paines Plough (U.K.) and developing a third Blue Mountains work, Lookout/Look Out!

Her play Shearwater will be produced by the Tasmanian Theatre Company in 2021.