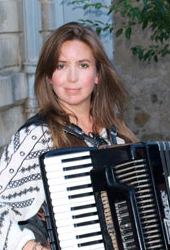 Sofia Chapman studied playwriting with the Australian National Playwrights’ Centre as well as completing a Bachelor of Arts (Hons) in Modern Languages at the University of Tasmania and an Associate Diploma of Music (Piano), before running away with the piano accordion.

Sofia is a queer writer and a musician, and consequently three plays have featured in Midsumma Festival, with live music. Sofia's plays include The Top Secret Violin Case 2020, Todd in Venice 2017, The Anorexic Chef 2011, and Untitled, or The Seat of Narcissa, performed at La Mama in 2016, and invited back for La Mama’s 50th birthday Mini Fest in 2017. Sofia also features in the La Mama 50th anniversary commemorative book. Short plays include The Accidental Death of an Accordionist at La Mama and Desperate Gallery which was performed in the Short & Sweet Festival in Sydney and Melbourne and published in England by Lazy Bee Scripts. Sofia’s epic The Four Accordionists of the Apocalypse won the ‘Best Emerging Writer’ award at the 2012 Melbourne Fringe Festival. This award was presented by Writers Victoria and Melbourne Theatre Company.