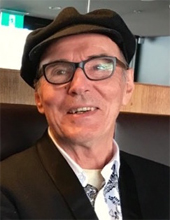 ‘Carols by Laserlight’ for Magpie Theatre and for Belvoir Theatre commissioned and directed by Geoffrey Rush in 1984 & 1985.


SHORT FILM
Writer/co-producer of ‘Chair with a View’.


AWARDS
Awgie for ‘Wollongong the Brave’.
Sammy for ‘The Norman Gunston Show’
Judge’s Prize at Mudfest for ‘A Chair with a View.’
AWG 2015 Fred Parsons Award for Contribution to Australian Comedy.