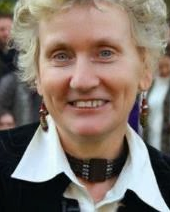 LINDA ARONSON was born in Britain and studied English Literature at the New University of Ulster and St Hilda's College, Oxford, before moving to Australia. Dinkum Assorted is her third mainstream theatre piece. Her first play The Fall Guy, had productions in Australia and the USA and was nominated for an AWGIE award. Her second play, Reginka's Lesson, won both the Sydney Theatre Company's Shorts Play Competition and the Elizabethan Theatre Trust Biennial Play Award. Her screen credits include the feature film Kostas, the mini-series adaptation The Young Wife, and episodes of Singles and Learned Friends, for which she won two AWGIES. In its first draft, Dinkum Assorted was shortlisted in the Mobil International Play Competition in Britain. Linda Aronson held the New South Wales Women and Arts Fellowship from 1986–87. She is married with two children.