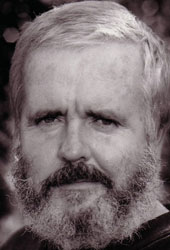 Rod Gibson is well known in the Northern Rivers area as a performance poet, playwright and storyteller. He has had 16 plays produced in the region, including two one-man shows. He was short-listed for the Angus and Robertson Bookworld Prize in 1993, and for the Off The Page National Short Play Competition in 1995, and has won or been highly commended in numerous literary competitions - he won the Jean Stone Poetry Award in 1994, and the Nicholas Shand Memorial Poetry Slam in 1999. He has also been widely published in magazines and anthologies such as ‘Writers in the Park’, the ‘Poets On Wheels’ anthology, and ‘Revolver’. In May 2000, Northern Rivers Performing Arts (NORPA) choreographed one of his longer poems as a dance piece. In 2003, Maverick Musicals published his one-act play, ‘Mein Fuhrer’. He has won first prize in the Schizophrenia Fellowship of New South Wales’ annual poetry competition for five years in a row. He now lives in Maclean.