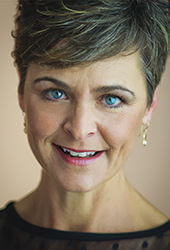 Michelle Pettigrove, best known for her long running role as Kate Bryant on A Country Practice, has made numerous tv appearances including Brides of Christ, Blue Heelers and City Homicide. Also a seasoned live performer with many theatre and cabaret credits to her name, Michelle is a founding member of The Funky Divas 3-girl singing group. For eight years she was the solo host of kids show Funhouse and starred in the ABC drama series Silver Sun. More recently she co-hosted national TV travel show What’s Up Downunder with husband Frankie J. Holden, and performs their cabaret around the country. Michelle is also an accomplished voice over artist with documentaries, long running radio and television campaigns to her credit. In 2019 she played the lead role of Magda in Spectrum Theatre’s production of Ladies in Black.

As a writer, Michelle’s one-woman play SEEDS was produced in the 2001 ‘Festival of One’ in Adelaide, and was successfully remounted in 2018 by Spectrum Theatre. SEEDS has also been a recent hit in Lithuania! Michelle contributes articles and images to a number of travel magazines, covering such diverse locations as Mauritius, Botswana and the US, and has recently completed her first novel Faith.