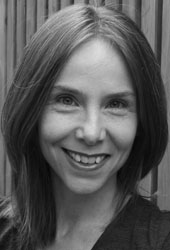 Samantha Bews is a theatre artist based in central Victoria. Her plays include: So Wet (Currency Press 2001); The Telephone Exchange (Australian Plays); Looking into a Heart of a Dying Star (commissioned by Playworks for the Melbourne Writer’s Festival 2002). Her installation and participatory theatre work includes: Room 408 (Monash University 2000) and Letters of Love and Dementia (with Dementia Australia 2017). She performed the solo performance Simone (!) at venues in Victoria between 2007 – 2011 and has performed her character Miss Hera See, an interactive performance for children, since 2003. Her first chapbook of poems will be published by Mark Time books in November 2018. Samantha is a graduate from the Victorian College of Arts (1989), received her Hons in Performance from Monash University (2001) and is a Varuna/Playwork recipient.