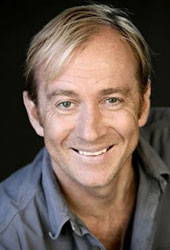 Adam May is an award winning playwright. His play Rising Fish Prayer about the disintegration of a fictional mine in Papua New Guinea, won the Australian Playbox Asialink Playwriting Competition, was awarded by the Australian Prime Minister, performed at the Malthouse Theatre, adapted and broadcast on the BBC Radio World Service, and originally published by Currency Press.

The Age has described Adam as a 'fine craftsman and consummate storyteller'.

Adam's other plays include Cobblestone 13, Waving at Strangers (with Zahim Albakri Dramalab Malaysia), Wax Parade (about Australia at Federation), The Victor (twice nominated for the Wal Cherry Playwrighting Award and performed at the Carlton Courthouse), No Prophet, No Angel shared winner of the Playbox Asialink Playwrighting Competition, Buckley's Chance and None (performed at the Carlton Courthouse), Diplomacy on Coconut Island (Theatreworks), Bare Friends (Universal Theatre), the community play Hotel on Heartbreak Hill, Family Hold Back (Schools tour), Infinity, A Very Special Day, and Helkovitch.

Adam has been an active supporter of writing for the theatre being awarded a life membership of Melbourne Writers Theatre, facilitated the Ron Danielson Lecture at the Arts Centre ('Making Writers Making Plays'), and a founder of Writers Revenge on 3RRR and a writer of more than fourteen performed plays.

He is also known to Australian audiences as an actor having begun his career in the feature film Flynn appearing alongside Steven Berkoff, Guy Pierce and Claudia Karvan, and then more steadily as the semi-regular lawyer Ellis Corby in Blue Heelers. Critics have described him as: ‘an absolute delight to watch’ with ‘a contagious energy rarely seen in the theatre’, a ‘well disciplined performer’ and ‘full of sparkling energy and wicked humour’.