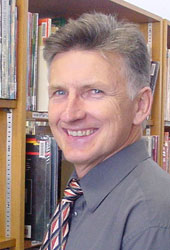 A NIDA graduate, Robert Jeffreys has been a professional actor and a Drama and English teacher, and has emerged as one of WA's most promising new playwrights. He has had two plays produced by Lyons Productions at The Blue Room: 'The Messenger' (2001) and 'The Simple Truth' (2002). 'The Simple Truth' also toured with Black Swan Theatre Company and Lyons Productions in 2002, 2003 and 2004. The controversial 'Cox Four' (Perth Theatre Company, 2002) and 'Covert' (2003) were both critical and popular successes. Robert has also written two dramas for ABC Radio.