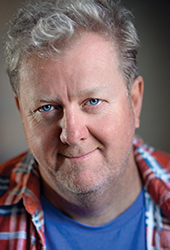 Steve trained as an actor at Theatre Nepean, Western Sydney University. His first play Ray's Tempest was shortlisted for the Patrick White Playwrights' Award and nominated in the Best New Australian Work category at the Sydney Theatre Awards following productions at both Belvoir St and MTC. Steve's second play Savage River was produced by the Griffin Theatre Company, MTC and the Tasmanian Theatre Company and was also nominated for Best New Australian Work at the Sydney Theatre Awards. Steve then wrote Food, a co-production between Belvoir St and Force Majeure, which he co-directed with Kate Champion. Food went onto tour Australia, and was nominated for the NSW Premiers Literary Award. Steve adapted the Peter Goldsworthy novel Jesus Wants Me for a Sunbeam that won the 2015 inaugural Lysicrates Prize, and was produced this year by The National Theatre in Parramatta. Steve’s latest play King of Pigs was developed by Playwriting Australia and concerned family violence. Produced by Redline at the Old Fitz to both a sold out season and critical acclaim King of Pigs is set to tour Australia in 2020. Steve is currently under commission at Belvoir St Theatre for a work concerning night shift workers titled The Future is History. Steve has worked as an actor in theatre, film and television for the last twenty-five years.