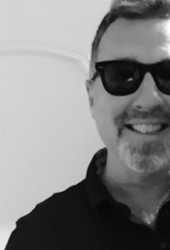 Ross Mueller is an Australian writer, a guest lecturer at Victorian College of the Arts, a Mentor for the National Studio, and he is the Fresh INK tutor for ATYP in Victoria.

In 2002 he was the Australian playwright at the International Residency of the Royal Court Theatre in London.

In March 2007 THE GHOST WRITER premiered at Melbourne Theatre Company. In the same year his play THE GLORY won the Wal Cherry Play of the year. CONSTRUCTION OF THE HUMAN HEART was short listed for the 2007 AWGIE Award for Best New Play, and was nominated for five Green Room Awards.

He won the New York New Dramatists Playwright exchange in 2008 for his play CONCUSSION, which premiered at Sydney Theatre Company in 2009. That year his play HARD CORE was shortlisted for the Patrick White Award.

In 2011 Ross’ play ZEBRA! premiered with a sell out season at STC.

He was appointed Artistic Director of Courthouse ARTS in Geelong where he successfully reinvigorated the organisation, turning it into a vibrant arts community. He has also worked on commissions and developments with St Martins, Canberra Youth Theatre and Back to Back Theatre.

In 2015 he completed his Masters in Writing for Performance at the Victorian College of the Arts, and his political satire I CAN’T EVEN premiered at Malthouse Theatre, Melbourne.

His verbatim play DARKER ANGELS was featured by Apocalypse Theatre in their response work: ASYLUM.

In 2017 A STRATEGIC PLAN premiered at Griffin Theatre Company and LIFETIME GUARANTEE premiered at Theatre Works.

He has written six plays for Radio National and had two childrens books published with Allen and Unwin. He is a freelance columnist, a teacher, and director.

A TOWN NAMED WAR BOY, which premiered to a sold out season at the State Library of NSW, toured Australia in 2018.