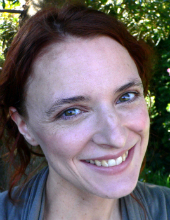 Carrie is a founding member of Mudlark Theatre. She graduated with a BPA (Theatre) from UTAS in 1997 and has had 13 years of experience performing, directing and writing in regional Tasmania. Companies include Mudlark, SSYT, Tasmania Performs, Tas Theatre Company, Theatre North, Second Storey Theatre, Streets Alive, BITco Productions, Bell Productions, and Centr Stage.

Her writing credits for Mudlark Theatre include Strange Fruit as part of Dancing Back Home, an epic continent-wide collaboration with JUTE Theatre in Cairns; The Fools of Fire in the 2008 season; and Cafe, which toured Tasmanian schools and colleges in 2007. She also wrote and directed the short film New Skin, awarded a WiFT Award for Emerging Artist.

Carrie wrote Chasing a Sound Like Rain, a youth theatre project for SSYT which was performed as part of the Ten Days on the Island Festival in 2011.