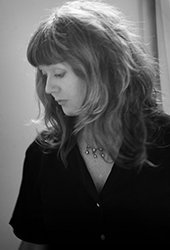 Mari Lourey (co-facilitator/dramaturg/creative producer) is a playwright, dramaturg, theatre maker and occasional actor, based between Broome WA and Melbourne. Over 25 years she has developed a practice of building work meticulously and collaboratively with innovative creative teams. She has a particular interest in working outside traditional methodologies of developing new work, particularly when it enables voices and stories beyond the traditional mainstream to be heard.

Between 2002-’20 she was researcher, writer and performer with innovative community arts and theatre company The Torch Project writing several plays with various Victorian communities: The Bridge, dir Rachael Maza, north-west Victorian tour, and Melbourne Trades Hall season 2003; My Home is My Castle, co-written and directed by Kirk Robson, Moorabbin Housing Estate; Faith, dir Rachael Maza, with The Big Issue and Wesley Mission, 2006. Between 2007-09 she was Artistic Co-ordinator of the Big Issue arts project Homeless Not Artless, creating several shows with director Adriano Cortese.

Starting out in music as a singer, she first trained in theatre before studying writing at RMIT’s Professional Writing and Editing Course 2000-2003 and MA in Performance Writing, VCA, 2012.