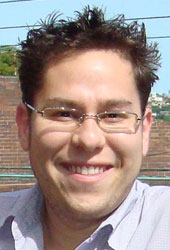 Jonathan Ari Lander is currently a PhD candidate in the School of History at UNSW where he lectures and tutors on the subjects of world history and Zionism. In 2001 Ari was admitted into the NIDA Playwrights' Studio. Since 2003, he has worked with dramaturge Timothy Daly. His plays include Broken Dreams, Redemption and Ezekiel’s Song. In October 2008 Ari was one of three writers accepted into the 2008-2009 Griffin Writer’s Residency.