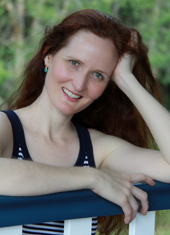 Genevieve Yates is a family physician and medical educator from Northern NSW, Australia, who is passionate about putting creativity into medicine and medicine into creativity. Genevieve writes for several medical publications and is a regular columnist for Australian Doctor and Good Practice. She has had several short stories published and a short film produced. Her first novel, Silver Linings, was published in 2011. She has also worked in film and TV, and performed on stage in plays, musicals and stand-up comedy.

Genevieve teaches violin, plays piano, sings and plays in two orchestras. In 2010 she was awarded the “Arts and Health Australia Awards for Excellence: Medical Humanities and Education award” and nominated for “National Medical Educator of the Year”. Her debut as a playwright and director was in May 2010 with Adam and Eve, which has since been published by the Australian Script Centre. She was placed 5th and 6th in the MAID2 PLAY Dogwood Playwrights Initiative 2010, for Adam and Eve and Death by Sausage, and won the Audience Choice Award at Armidale Fav Shorts for If the Shoe Fits in 2011. In 2013, GP the Musical, co-written with fellow GP, Gerard Ingham, was performed at the Melbourne International Comedy Festival.