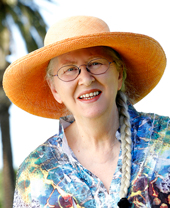 Thérèse Radic is the author and editor of ten books, 16 plays and numerous articles, monographs, chapters and reviews on aspects of Australian music history. She has been a lecturer, broadcaster, course designer and music consultant for museums, galleries, celebratory events, film, television and the stage and sat on too many committees.

Her plays include The Emperor Regrets, Peach Melba, Madame Mao, A Whip Round for Percy Grainger, all first produced by the Playbox Theatre Company, all appearing nationally and published by Currency Press and Yackandandah.

Some of My Best Friends are Women (with Leonard Radic), was premiered by the MTC. Madame Mao has been produced in the USA and UK. Peach Melba was shortlisted for the Victorian Premier’s Literary Awards.

She is currently an Associate Professor and an Honorary Principal Research Fellow in the Faculty of the VCA and Music at the University of Melbourne, where she is writing a history of music as propaganda in colonial Australia.