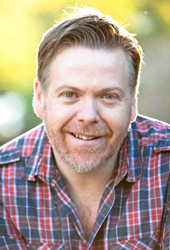 Wayne is one of the leading lights in the independent theatre world.

He is an actor, director, producer and award-winning writer. His work has been seen all over the world, his most successful plays include, The Subtle Art of Flirting, We’ll Always Have Wagga, Fag Boy & the Married Guy, Silvertop Ash, The Girlie Show, Everything I Know I Learnt From Madonna, Flame Trees and The Bridesmaid Must Die!.

As an actor, he has appeared in Underbelly and The Doctor Blake Mysteries, this year appearing in the feature films, Fragmentary, The Casting Game and his own web series, After Nightfall. Wayne has been a storyliner on TV’s Neighbours, the Festival Director for Short+Sweet Sydney 2017, and this year will release his debut novel, Electricity.

Next for Wayne is Diva Wars at The New Theatre for Fringe in September.