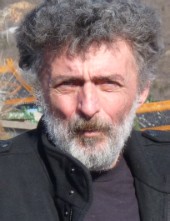 Frank has attempted a variety of jobs with varying degrees of calamity. Plays produced include Tales of Dark Knitting, Who Slew Reg Smedley? Vapours, Islands, The Case, Pan, Punch and Judy and Neighbours. His acclaimed adaptation of HG Wells’ The Time Machine, starring Mark Lee, is to be revived mid-year.

With John’s widow Bunny Gibson, Frank wrote the biography of Australian acting icon John Meillon—Thanks A Meillon! His 'unfinished' film Out Back—The Butcher’s Cut has escaped and is apparently going on some web thing soon.

Frank wrote the excellent (honest!) short film At The Edge of The Bed, adapted from de Maupassant’s short story, and he has also written several full-length screenplays, other plays, prose stuff, cheques, Facebook dealies and curt notes under the nom de guerre 'Disgusted of Sydney.'

Frank is married to notorious gangster Jenny Brown. They have two excellent children and a house full of stuff they like. It probably needs a bit of a cull really. There’s a lot of junk in there.

To a considerable extent Frank has no idea what he’s going to do next but would like to do it in Morocco or Spain.