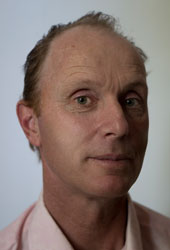 Kieran Carroll is a playwright from Melbourne. Recent productions include the highly successful Sons of Sun (The Sydney Opera House Studio, November 2014 & May 2015) and The Les Robinson Story (Old Fitzroy Theatre, Sydney, November 2014). Eight productions of his work have appeared in America and England throughout 2015 and 2016, and in Italian translation in Bologna, Italy.

Kieran holds an MA (by Research) in playwriting from QUT, Brisbane. In 2014, he was awarded 2nd place in the Boccaccio Afterlife Competition (Brown University, United States) for Best Theatrical Adaptation. He has received writing residencies around the world including the prestigious Yaddo in Saratoga Springs, New York.

In 2015, Kieran was a commissioned playwright at Monash University, Melbourne. The commission produced The Truth is Longer Than a Lie, a research play adaptation about child abuse from the non-fiction book of the same name. The play was published in November 2015 by Black Pepper Press.

Kieran has two upcoming plays in mid-2017 soon to appear at New York festivals and is currently researching the life of Peter Finch.