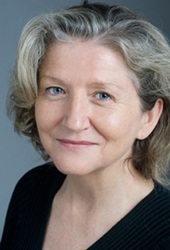 FIONA STEWART has been practicing her craft as an actor, singer, songwriter and teacher of expressive arts for 30 years. She is a N.I.D.A. graduate and has had extensive experience working in the performing arts.

During the 80's and 90's, she had the opportunity to work with all the major national subsidised theatre companies and television networks as well as appearing in several films. She has had the opportunity to live, work, study and practice her craft, here in Australia, Germany, the U.K., the U.S. and France.

Between 1995 and 2004, she lived, worked and toured throughout France as a jazz singer, while at the same time giving workshops, developing her own style of voice training known as bodymusic. Fiona has taught voice and singing to countless individuals in school, community and professional settings and created much vocal music for theatre productions. She was principal tutor in Contemporary Voice at the Conservatorium of Music in Tasmania between ‘05 - ‘09.

She has also worked an expressive arts educator at both the Women's and Men’s Prison in Hobart in maximum security sections on songwriting projects. She has also worked in the disability sectors with those with brain injury, stroke sufferers, as well as the intellectually impaired.

She has recently written, produced and performed in her own one woman musical play, BIJOU’S SECRET which enjoyed two successful seasons in Hobart, Melbourne and participated at the Women’s Theatre Festival in Memphis, USA in 2014. She completed a Masters of Writing for Performance in 2017 at the VCA. She has written a memoir, as yet unpublished; FAULTLINE.

She has just completed the first season of her second play, BELLS AND WHISTLES at La Mama Theatre in Melbourne. She co-produced, directed, wrote and acted in the work.