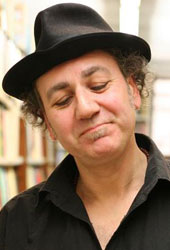 Born into an Irish-Italian working class family in Sydney’s Inner West, Journalist, playwright, poet, puppeteer and performer Benito Di Fonzo has written for, and been profiled by, the best and worst of publications including The Sydney Morning Herald, The Sun Herald, The Australian, CNN, and Bardfly Magazine (where he was editor).

Benito has performed his narrative neo-beat poems and spoken word in London, Edinburgh, Sydney, Melbourne, Rome, Adelaide, Perth and Indonesia. As well as writing radio serials and plays for 2SER and 2FBI he has had two plays broadcast live from The Sydney Opera House. He has also performed on ABC 702 & Radio National, 3RRR and Resonance FM (UK) among others.

His debut stage play Breakfast At Krishna's filled houses at Tap, Sydney in 2000. Benito’s 2010 production The Chronic Ills of Robert Zimmerman, AKA Bob Dylan (A Lie) was a hit of Adelaide Fringe before a sold-out season at The Old Fitz in Sydney and a litany of glowing reviews, resulting in the show being awarded Best of Independent Theatre 2010 and a revival at The Seymour Centre. It has since toured regionally and been adapted into a verse-novel (available through Amazon). Benito’s most recent show, Lenny Bruce: 13 Daze Un-Dug in Sydney 1962 premiered to positive reviews in April 2013 for Tamarama Rock Surfers.

Benito achieved degrees in Literature and Creative Writing at The University of Western Sydney and has done postgraduate studies at AFTRS, Sydney University and UTS. In 2001 he was awarded the Inner City Life Literary Award by The NSW Writers’ Centre. His favourite colour is irrelevant.