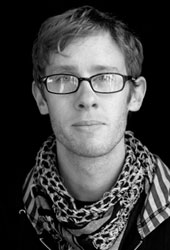 Shane is a WAAPA graduate (BA in Theatre Arts) and a founding member of award-winning West Australian independent theatre company Weeping Spoon Productions. He is probably best known in Canada for his solo work as his alter-ego “Zack Adams”. His solo shows Love Songs For Future Girl and A Complete History Of Zack Adams received rave reviews and were both nominated for the JUST FOR LAUGHS AWARD (Best comedy show) in 2011 and 2012.

As an improviser, he a senior player of Australian Improv-comedy troupe The Big HOO-HAA!, a two-time National Theatresports Finalist and has performed as part of The All Star Improv Jam with Montreal Improv.

A Spare Parts Puppet Theatre Company Associate, he has performed as a puppeteer numerous productions including Cat Balloon, The Man From Snowy River and The Bunyip of Berkeley's Creek. He also co-wrote and starred in Weeping Spoon’s award winning international production GREED and produced and starred in two sell-out seasons of the highly successful revival of Checkout - The Musical in 2012.

Shane most recent work includes playing the lead role of Brad Majors in The Rocky Horror Show at Mainline Theatre in Montreal and performing with The Montreal Shakespeare Theatre Company’s 2012/2013 Touring Production.