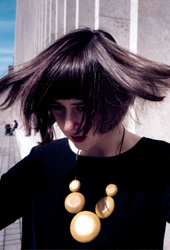 Louris van de Geer is a playwright and theatre maker from Melbourne, Australia. She has been described as “a quirky and distinctive new voice worth checking out" by The Age, and her work as a "brilliant...study of human existence”. Her writing experiments with contemporary theatrical form and explores the impossible, the grim and the absurd; exposing them as deeply human.

Louris holds a Masters of Writing for Performance from the Victorian College of the Arts (Melbourne University), where she studied under Raimondo Cortese from Ranters Theatre. She was mentored by Arena Theatre Company Artistic Director, Christian Leavesley through the Australia Council’s JUMP program. Louris has interned with writer and director Richard Maxwell from New York City Players, Marius von Mayenburg at the Schaubühne Berlin and Ivo van Hove from Toneelgroep Amsterdam. Her work has been a finalist for the 2015 & 2016 Rodney Seaborn Award, the 2015 Griffin Award and the 2014 Edward Albee Scholarship. She is the recipient of the 2015 Malcolm Robertson Prize and was named as one of Melbourne Writers Festival’s ’30 Under 30’ best young writers in Melbourne.

Recent projects include Looking Glass (fortyfivedownstairs 2017), The Son (MTC Cybec 2016), Triumph (fortyfivedownstairs 2016) and Hello There, We've Been Waiting For You (Next Wave & ACMI 2014). Her other projects include Tuesday (MKA 2012) which has now been adapted into a radio play for ABC Radio National and Hunny-Bun & Baby Doll (Dixon Place NYC, 2015 & Melbourne Fringe Festival, 2010) among others.