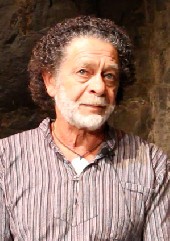 Jim Everett was born at Flinders Island, Tasmania in 1942. He is from the clan plangermairreenner of the Ben Lomond people, a clan of the Cape Portland nation in North-east Tasmania. Jim left primary school at 14 years to start work. His many years of working life include 13 years at sea and over 30 years formal involvement in the Aboriginal Struggle. Jim has a long history in the public service in Aboriginal Affairs, and has travelled Australia visiting many remote Aboriginal communities. Jim began writing poetry at an early age. He wrote his first play, We Are Survivors, in 1984. His written works now include plays, political papers and short stories, and he has been published in 10 major anthologies. Jim’s other work includes television documentaries, educational videos and theatre productions.