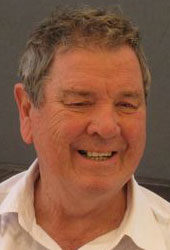 The late Neil Quintrell was a pharmacist, counsellor and psychologist and he rose to be Head of Health and Counselling Service Flinders University; he tutored, lectured and was involved in research at all three South Australian universities. Outside of those pursuits, Neil’s continuing passion was writing. In early years, he collaborated with Douglas Simper to produce several musicals such as Professor Prism’s Premonition for use in schools. Neil’s dramatised history of Australia, In Search of the Great Australian National Anthem has been published. Escape of the Chrysalids, written with Greg Elliott, was performed in the 1993 Come Out Festival. Neil’s song lyrics have been published, and are in continuing use, by the Uniting Church of Australia and in the USA. He collaborated frequently with Greg Elliott and together they wrote, among other plays, Hidden Agenda and Dumping. He was commissioned to write From Craft to Science, - The Education of Pharmacists and Medical Scientists in South Australia, published in 2008, and In the public Interest - The Pharmacy Board of S.A.1891 – 2010, published 2009. In retirement Neil wrote stories, family histories and poetry for family and friends, and two novels.