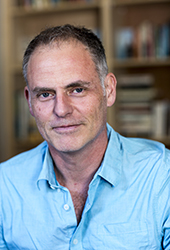 His poems, essays and stories have appeared in numerous publications, including: The Age, The Australian, Antipodes (US), Best Australian Stories and Poems, Canberra Times, Griffith Review, Heat, Island, Meanjin, Overland and Westerly.

Paul received a 2009 Glenfern Writers’ Studio/Readings Foundation Fellowship, and has won, been placed or commended in many literary prizes, He has also judged literary prizes, including the Victorian Premier’s Award for Poetry and the Grace Marion Wilson Emerging Writers Prize.

Paul has written and written/performed several works for stage. Performed by Silas Aiton, Ragdoll was staged at La Mama Theatre, Carlton as part of the short play series Dark/Light in 2014. He wrote and performed the comedy show Being a Wheel Family at the Melbourne Fringe Festival in 2013. As If Nothing Is Happening, his poetry-meets-music album with Bill Buttler, was performed at La Mama Theatre, Northcote’s Wesley Ann and Gasworks Theatre in Port Melbourne. His latest monologue-meets-music album, My Coffin Lid, My Shield, a collaboration with Simon Mason, was performed at The Night Heron, Footscray in 2019.