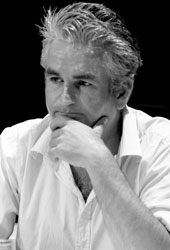 Aidan Fennessy's plays have been performed both internationally and nationally by companies such as La Trastienda Madrid, Melbourne Theatre Company, Queensland Theatre Company, Black Swan, Griffin, HotHouse Theatre and Red Stitch among others. His play Chilling and Killing My Annabel Lee won the Wal Cherry Award and was shortlisted for the Victorian Premier’s Literary Award. His Melbourne International Comedy Festival play The Trade won the prestigious Barry Award and his play National Interest won the Victorian Premiers Literary Award - People's Choice Award. His other works include The House on The Lake and The Way Things Work, which was performed by Red Stitch as part of their 2017 season.

Formerly an Associate Director for Melbourne Theatre Company, he was a member of the Company’s 2012 Programming Team. His latest play The Architect was performed in the 2018 Melbourne Theatre Company season and his play The Heartbreak Choir performed in the MTC 2020 season. His MTC directing credits include Circle Mirror Transformation, The Joy of Text, Boston Marriage, Ruby Moon, Music, Things We Do for Love and His Girl Friday. His other directing credits include Oleanna (HotHouse), A Mile in her Shadow (Store Room Theatre Workshop), A Pilot Version of Something to Die For (Store Room Theatre Workshop), and A Commercial Farce (Malthouse), Born From Animals and An Inconvenient Woman (Tasmanian Theatre Company) amongst others. Aidan was a founding member of Chameleon Theatre, a member of the Artistic Directorate of HotHouse Theatre, and Artistic Director of the Store Room Theatre Workshop.