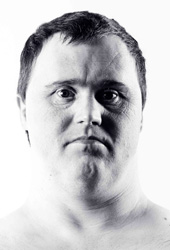 Mark joined Back to Back in 1989. Mark has extensive credits in theatre, film and television with featured roles in Neighbours and Blue Heelers. Mark is a comic performer of rare talent and exquisite timing, a “modern day Chaplin” (Adelaide Advertiser). He has created some of the most memorable characters in Back to Back Theatre’s repertoire. Recent works include the development of Tour Guide (Austria) The Democratic Set, Food Court and Ganesh Versus the Third Reich. He is currently polishing his super hero skills for work-in-development Laser Beak Man.