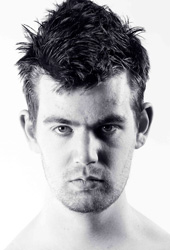 Scott began working as a member of Theatre of Speed in 2005, with D9 (The Gaol Film) as his first project. After performing in Minotaur, he landed the lead role as the Boatman in POD 7 (Geelong), a character he describes as being “really gentle.” Scott joined Back to Back in 2007 and performs in Food Court and Ganesh Versus the Third Reich. He has also been part of the development of Tour Guide and community residency project The Democratic Set.