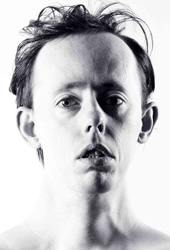 Simon first worked with Back to Back when he was a student at Nelson Park School, devising and performing in Drag Racers in Love (1999).

Simon was an important contributor to the development and growth of Theatre of Speed and has since performed in Arnold, Fishman, Inside the Angel House, Minotaur, Pod 7 in Geelong and DMI.

Since Simon joined the Back to Back Theatre ensemble in 2003 he has made an enormous contribution to the company. He plays the role as Steve in Small Metal Objects which has now travelled to 31 cities around the world. Simon devised and performs in Ganesh Versus the Third Reichand is part of ongoing community project The Democratic Set.

Simon is a maestro trivia Quiz Master and has spectacular golfing skills. He is also well known for his role in the successful Australian film Noise.