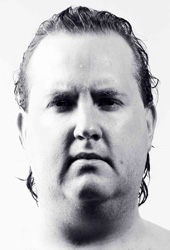 Brian began his work with Back to Back Theatre in 1995 as a member of Theatre of Speed– taking lead roles in Minotaur, POD 7 in Geelong and DMI. Since 2007 Brian has worked consistently as an extra in film and TV work. Since joining the Back to Back ensemble in 2008 he has performed in numerous Theatre of Speed productions, in Tour Guide (Austria) and as a collaborator with The Democratic Set. He is a devisor/performer in Ganesh Versus the Third Reich.