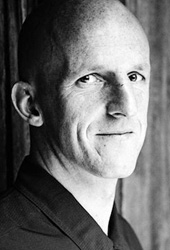 David was born in Perth. He graduated from Sheffield University in 1990 and studied acting at The Poor School in London. He subsequently trained with Antonio Fava (Commedia dell’arte), Phillippe Gaulier (Clown and Bouffons) and Dominique Dupuy (Contemporary Dance). He completed a practise based MA and PhD (How To Be Funny) at the University of Kent in 2006.

Since 1992 he has been the joint Artistic Director of the UK based performance group Ridiculusmus who are a National portfolio organisation of the Arts Council of England. He has co-created and performed in all their productions to date: The Third Policeman; Three Men In A Boat; At Swim-Two-Birds; Yes,Yes,Yes; The Exhibitionists; Say Nothing; Paranoid Household; Broken; Community Conscious Folk; Ideas Men, How To Be Funny; Dada; The Importance Of Being Earnest; Tough Time, Nice Time, Goodbye Princess, Total Football and The Eradication of Schizophrenia in Western Lapland.

David devised and performed in two Back to Back theatre co-productions: Ganesh versus the Third Reich (Melbourne Festival 2011), winner of The Age critics award and Sunday Age play of the year 2011 and the Helpmann Award for best play 2012; and Super Discount (STC/Malthouse 2013).

David has directed Russell McGilton’s Bombay to Beijing by Bicycle, Kazuko Hohki’s My Husband is a Spaceman; Richard Talbot’s The Singing Nun, Tom Doig’s Selling Ice To The Eskimos and Stuart Christie and Kane Peterson’s Dos or Duo and Dos or Duo Deux. He has collaborated with Nicola Gunn on Hello My Name Is (Winner of best experimental play – Melbourne Fringe Awards 2012) and In Spite of Myself (Melbourne Festival Commission 2013).

As an academic, David has worked as a visiting lecturer at universities throughout the UK, regularly contributes to the Centre Performance Research masterclass programme and is currently a Honorary Research Fellow and mentor for graduates at the Victorian College of the Arts.