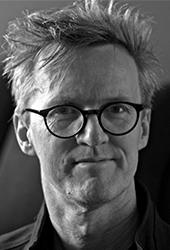 Matt has also written numerous plays for the theatre, including RUBY MOON, TEAR FROM A GLASS EYE, MR MELANCHOLY and FOOTPRINTS ON WATER which have been produced locally and internationally. His writing awards include the ANPC/New Dramatists Award, the Wal Cherry Play of the Year Award and the British Council New International Playwriting Award.

His feature film debut, POOR BOY, adapted from his original play and directed by Guy Pearce, is scheduled for production in 2019 with Aquarius Films.