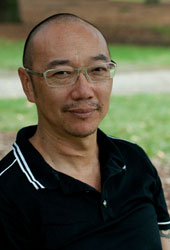 Tony Ayres is an award-winning showrunner, writer and director in television and feature films. He is also one of the founding members of Matchbox Pictures.

Previously, Tony was the showrunner on Nowhere Boys Series 1, which won an AACTA, Logie, and a Prix Jeunesse International 2014 award. He was also the showrunner and director on The Slap, which has been aired around the world, and has won a multitude of awards, including 5 AACTA Awards and nominations for a BAFTA and an International Emmy. Tony’s other scripted television work includes producing the comedy series Bogan Pride, directing the telemovie Saved, and Executive Producing the telemovie Underground.

His first feature Walking on Water won the “Teddy Award” at Berlin in 2002 and won 5 AFI awards, and second feature film, The Home Song Stories, also premiered at Berlin and won 24 Australian and international awards including 8 AFI Awards.