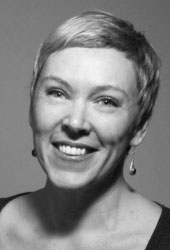 Virginia Proud is a Melbourne based actor, director and writer, who trained at Actors Centre Australia in Sydney. She spent ten years writing and working in Europe, where she was a founder and Producing Artistic Director of the Budapest English Theatre, directing and developing new local writing and presented popular English language contemporary playwrights to audiences in Central Europe.

Her plays Away, The Afflicted Trilogy, Pretext and Master of His Domain, were presented in the theatre’s repertoire.

She produced a number of international touring shows in Budapest, including – The Metamorphosis, for Ego Actus Theatre Company (US), Venus in Fur for Prague Shakespeare Company (CZ/US) and A View From The Street for Geordie Little Music (AU/DE).

While in Hungary she worked independently on a number of international film and television productions, appeared in the US TV series Strike Back and voiced the award-winning animated feature, Ruben Brandt, Collector. She is also a researcher and writer in the field of European culture, cultural diplomacy and foreign affairs.