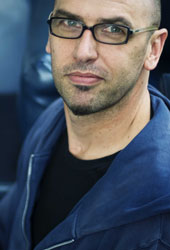 Chris Drummond is Artistic Director of Brink Productions. Works commissioned, developed and directed for Brink include Thursday by Bryony Lavery (with English Touring Theatre), When the Rain Stops Falling by Andrew Bovell (a collaboration with visual artist Hossein Valamanesh), Land & Sea by Nicki Bloom, Skip Miller’s Hit Songs by Sean Riley, Harbinger by Matthew Whittet, The Hypochondriac (adapted from the Moliere) by Paul Galloway, Beetle Graduation by Susan Rogers, The Clockwork Forest by Doug MacLeod (with Windmill Theatre), This Uncharted Hour by Finegan Kruckemeyer and Drums in the Night (adapted from the Brecht) by Finegan Kruckemeyer.

For the State Theatre Company of SA Chris has directed Babyteeth by Rita Kalnejais, Drowning in My Ocean of You by Fiona Sprott, Art by Yasmina Reza and The Merchant of Venice.