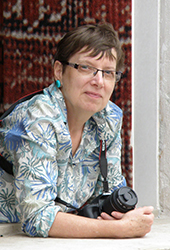 Frances Rouse has been writing poetry, plays, short stories and researched history articles for many years. Her poems and short stories have been published in most Australian literary journals and she was poetry editor for the Sydney Morning Herald for 20 years. Work was also broadcast on ABC Radio National.

Her play Counting Iceberg about Elizabeth, wife of Captain Cook, has received many readings, rehearsed readings and performances around Australia (including Cooktown) Honolulu and Kirovograd, Ukraine and the Redpath Museum, McGill University, Montreal. Upcoming rehearsed readings will take place at the Toitu Otago Settlers' Museum, Dunedin, NZ and in conjunction with the Australian tour of Endeavour Replica for the Cook commemorations in 2020. Frances continues to explore stories from previous centuries which reflect on our contemporary Life.

A second play WordPlay also expands on these ideas. Following the life of her printing ancestor and the influence of the media. Many eccentric and outrageous authors, including a 3-times convicted thief and 2 blackmailing courtesans crossed his path. Current affairs also intruded such as the assassination of the prime minister and a long-running legal case between the Prince Regent and his long-suffering wife.

A third play about the intrepid opera singer Anna Bishop who travelled the world performing in the mid-19th century, features live musicians and is in the style of a autobiographical travel documentary/chat show.