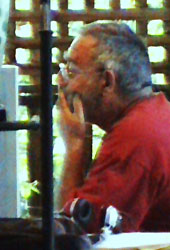 Jonathan Hardy (20 September, 1940 - 30 July, 2012) was a New Zealand-born Australian actor, writer and director. Hardy trained as an actor in Britain, and worked for the Royal National Theatre among other British companies. He returned to New Zealand with an RSC touring production and remained to help expand the NZ theatre industry. He later emigrated to Australia. He was in the original cast of Breaker Morant, presented by the MTC in Melbourne (1978). Hardy's film work included The Devil's Playground, Mr Reliable, and Moulin Rouge! He wrote the screenplay for the film of Breaker Morant for which he received an AFI award, and was nominated for an Academy Award. He also won the Taorima Festival (Italy) Bronze Award for Best Script for Constance.

Hardy wrote and directed the movie Backstage starring Laura Branigan. He is best known to international audiences for providing the voice of Dominic Rygel XVI in the sci-fi series Farscape. Hardy died, aged 71, at his home in the Southern Highlands of New South Wales on 30 July 2012.