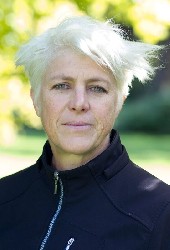 Dr Donna Jackson is a director, writer, teacher, consultant and arts practitioner who focuses on the area of democratic art making. She has been awarded a Fellowship from the Australia Council for the Arts and inducted onto the Victorian Honour Roll of Women.

In 1991 she founded and was the artistic director of the Women’s Circus. Through performing her one woman shows, The Baby Show and Car Maintenance Explosives and Love, Jackson communicates provocative ideas. Phil Doust described the latter for The Guardian London as, “the most perfect fusion of writing and performance”.

This practice and research-led way into making art democratically has been further developed by academic study. Jackson completed a Master of Arts at La Trobe University on processes of making arts projects involving social change and used the production of Dust as the focus of enquiry.

Through her company Hubcap Productions, she is currently the initiator and artistic director of the Art and Industry Festival is based in the western suburbs of Melbourne. As part of this festival Jackson is collaborating with a range of artists and trades people and developing her processes of working further.