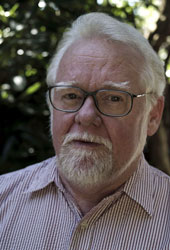 Stephen Gard's first play was produced by Sydney's pro-am New Theatre, in 1972, and enjoyed an extended run, as did the work which followed in 1974. An award-winning one-acter encouraged Stephen Gard to resign from the teaching profession and pursue a writing career; his decision was affirmed almost immediately by the Melbourne Theatre Company accepting his next play, The Celebrated, for its 'Upstairs' theatre season.

Since then, Stephen Gard has published works of fiction, non-fiction, verse, and drama in outlets as diverse as The School Magazine and radio 2SER-FM. His current work in preparation is a traveller's companion to the Hume Highway.