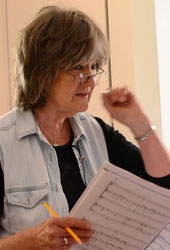 For 15 years Lorraine was a member of Music Branch (Education Department of Victoria) teaching music in inner suburban schools, and producing many new resource materials (Sounds Fun, Great and Magic) and curriculum documents (A Guide to Music in the Primary School).

She was the Musical Director of the ABC SING series from 1986 to 1992 and has worked extensively as a composer, arranger and musical director for a wide range of other ABC radio programs.

In addition to two published collections of songs for children (The Fix-It Man, Macmillan, 1979 and The Right Way Round, Bilarm Music, 1985), Lorraine has also written and produced Good Timing (music resource kit), piano pieces Jazzamatazz, The Whole Suite and Kaleidoscope, and in 2015 released a new CD recording of her song cycle, Maiden Voyage.

Lorraine has had extensive experience in the theatre as both a composer and stage manager. A founding member of the APG (Pram Factory) and Melbourne Writers Theatre, she has also worked at Playbox (Malthouse), La Mama, The Church, Organ Factory, VCA Drama School, Theatreworks, Athenaeum, Universal Theatre, Handspan, Polyglot, Melbourne, Perth, Flinders and Deakin Universities, and Rusden Drama Department.

In 1999 she was accepted as an Associate Composer by the Australian Music Centre and over the past 20 years has been writing curriculum materials and presenting Professional Development courses for Musica Viva In Schools, Melbourne Symphony Orchestra, Sydney Opera House, Oz Opera, Australian Society for Music Education, and the National Gallery of Victoria. Milne has also taught on a casual basis at Melbourne University.

In 2014 she was inducted in the aMuse Music Education Hall of Fame and in 2015 was awarded an APRA/AMCOS/AMC Art Music Award for Excellence in Music Education for her sustained contribution over five decades as teacher, author, composer, arranger and musical director.