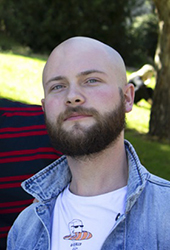 James has recently completed a Bachelor of Creative Arts (Creative Writing) at Flinders University. An admirer of classic 'in-yer-face' theatre, James creates works that interrogate our attitudes to privilege and decorum, both on and off stage.

James has had several works produced by the University of Adelaide Theatre Guild including When Shall We Three Meet Again? (2018), Angry Love and A Domestic Autumn (2016). He also wrote and directed Empty Vanity with Symposium Productions in the 2017 Adelaide Fringe.

He is a recipient of the State Theatre Company of South Australia young playwrights award (2016) and was an editor at Empire Times in 2019.

James’ first play A Domestic Autumn focuses on suburban anxieties, while his most recent play When Shall We Three Meet Again? adapts Shakespeare’s Macbeth in a postmodern manner. Both have been published by Australian Plays in 2016 and 2019 respectively.