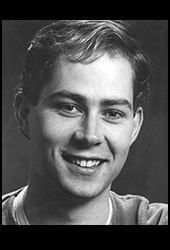 Tim Conigrave (1959 – 1994) was an actor, writer and activist. He grew up in Melbourne, graduated from Monash University and worked as a performer with St Martin's Youth Arts Centre and later with the Australian Performing Group (APG) at The Pram Factory. He wrote his first play,The Blitz Kids in 1981.

Conigrave went on to study at the National Institute of Dramatic Art (NIDA), graduating in 1984. He joined the Board of Griffin Theatre and was instrumental in initiating the acclaimed Soft Targets (1986) project. He also appeared in a number of plays and musical cabarets. As a playwright he produced two more works Thieving Boy and Like Stars in your Hands.

His major work, the autobiographical Holding the Man, is the story of his 15-year love affair with John Caleo who he met in high school. They were both diagnosed with HIV in 1985. Caleo later succumbed to cancer and Conigrave nursed him while fighting his own illness. John Caleo died in 1992, aged 31. Conigrave finished Holding the Man shortly before dying of an AIDS-related illness in October 1994, aged 34. The book was published by Penguin in 1995 and won the United Nations Award for Non-Fiction that year.

Holding the Man has been adapted into a multi-award-winning stage play by Tommy Murphy and a 2015 film directed by Neil Armfield. A documentary based on the lives of Tim Conigrave and John Caleo, Remembering the Man, premiered at the Adelaide Film Festival in October 2015.

The much loved memoir won the United Nations Human Rights Award for Non-Fiction in 1995 and was listed as one of the “100 Favourite Australian Books” by the Australian Society of Authors in 2003. It has been an international best seller and was reprinted under the Popular Penguin imprint in 2009 and again in tandem with the release of the feature film in 2015. Holding the Man has never been out of print and has sold over eighty thousand copies.