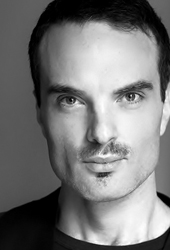 Jamie learnt about what makes theatre good by first learning about what makes a story good, he also learnt a great deal about acting, about singing etc at NASDA way back at the turn of the millennium.

Since then he’s performed in Opera, Mask & Mime street theatre, huge musical theatre revues for audiences of tens of thousands, won radio song contests, written libretto for a musical based on ‘Once Were Warriors’ which toured NZ, musically directed a few awesome original shows (by other people), toured with the National Children’s Theatre, then with the Maori Theatre Company ‘Te Rakau’, written and produced the play ‘Shoes’ and a duologue musical ‘Becoming The Courtesan’, played improv piano for NZ Comedy & Improv Festivals, entertained Christmas tourists at the grand piano on top of Auckland in the Sky Tower.

Here in Aussie he’s performed with Magnormos at The Recital Centre and at The Comedy Theatre, where his cabaret ‘Gobsmacked: Showbiz & Dating’ (written for Nikki Aitken) was the opener for OzMade Musicals 2012. He’s been a finalist in the Melbourne ‘Short & Sweet’ Cabaret Festival (and won best writing at the Sydney event), played at Chapel Off Chapel for the Melbourne International Comedy Festival, toured to Adelaide, played Midsumma at The Butterfly Club in 2013, and toured NZ to critical acclaim. Back in NZ, he wrote and performed in a stunning collaboration with Okareka Dance Co. called ‘K’Rd Strip’, a queer-as contemporary dance meets cabaret, which toured to Edinburgh Festival '15.

He finally wrote a solo show ‘Handsome Devil’, which he nervously debuted late 2014, and so far 2016 has been devoted to his first BIG musical 'Butch Masters: Man of Destiny' which debuted at Alex Theatre St Kilda for Midsumma '16.