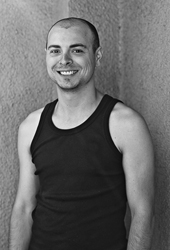 In 2016, Gavin Roach adapted Daniel Witthaus’ book BEYOND PRISCILLA for the stage, which he produced at Gas Works. He was the writer/performer of CONFESSIONS OF A GRINDR ADDICT, which debuted at Sydney Fringe (2011), and has toured the show both locally and abroad. Since then, Gavin has written and performed several other one-man shows; GETTING MY DAILY GRIND (2011), ANY WOMB WILL DO (Sydney, Melbourne, New Zealand), I CAN’T SAY THE ‘F’ WORD (Melbourne, Perth, New Zealand) and he is currently touring his latest work, THE MEASURE OF A MAN. His directing credits include WOLF LULLABY (2006), LIEBRE ARCHIE (2009), and IN THE COMPANY OF ANTS (2010).