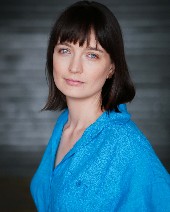 Belinda is a writer, director, and actor. Trained at the National Academy of Singing and Dramatic Art (NASDA, 2008).

Best described as an ‘actors’ director’, her directing highlights include the hit musical The Addams Family, the cabaret comedy How I Met My Dead Husband, the feminist retelling Ophelia Thinks Harder, and more than seventeen children’s drama productions.

She’s performed in over thirty eight plays and musicals, and a number of television commercials. Her acting highlights include Gerry in That Time Everything Went Well and We Were Totally Fine (co-wrote), Ginny in Outside In and Macbeth in Macbeth.

Her writing (including eight plays) has been performed at Melbourne International Comedy Festival and Melbourne Fringe Festival. ​Her plays (Fairy Tale News, A Hero’s Guide to Saving the Planet, That Time Everything Went Well and We Were Totally Fine) have been published by Australian Plays, and her poetry by Blackmail Press.

While living in Melbourne she co-founded the independent theatre company, Wit Incorporated (2014), was Artistic Director there for six years and founded the children’s drama program, Wit Kids.