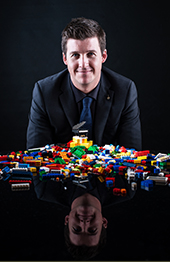 Bradley McCaw is an Australian performer, composer, playwright, and actor. His one man show, ‘Cabaret: The Complete Unauthorised Biography’ won the 2012 International Cabaret Showcase touring Internationally featuring a sold-out performance on Broadway’s ‘42nd Street.’ He was awarded the ‘2011 Young Emerging Playwrights Award’ by the Queensland Theatre Company, his work was the first musical ever to be awarded this prize.
In 2012, he was commissioned to contribute original music/lyrics to an adaptation of Roger Bennett's play, Up The Ladder directed by Wesley Enoch. His song 'Hard to Keep a Good Girl Down,' originally written for this project has since been performed all around the world by cabaret star, current co-Artistic director of Adelaide Cabaret Festival, Ali McGregor. ​Other works include ‘Becoming Bill,’ ’The Oasis’ a musical, ‘Mouldy Figs’ and an adaptation of 'A Little Princess' as an artist in residence at Haywood Studios.