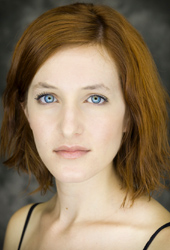 Lucy graduated from the Western Australian Academy of Performing Arts (WAAPA) in 2015 with a Bachelor of Performing Arts. In 2014 she established her own theatre company, New Ghosts, which she has since used as a platform to create and produce new work. Her first full-length work, FRACTURE, was produced as part of The Blue Room season one in 2015, which Lucy wrote, assistant directed and produced. After a successful sold out season, Lucy undertook a second development of FRACTURE alongside dramaturge Nicki Bloom. The re-developed script made a successful debut as part of the Old Fitz Late Night Program, which Lucy also directed and produced.

Other theatre credits include THE REMEDY (The Blue Room Theatre) as deviser/performer, TALES OF THE REBELLION (Chrissie Parrot Arts/WAAPA) as a deviser/solo performer, FLAMING YOUTH (Perth Fringe) as writer/director,ALL GOOD THINGS (ATYP) as assistant director, and R&J (Perth Fringe), ANOTHER TWIN and MINE (WAYTCo) as a performer. Lucy is currently developing her second script, MIMESIS, which she hopes to premiere in 2018.